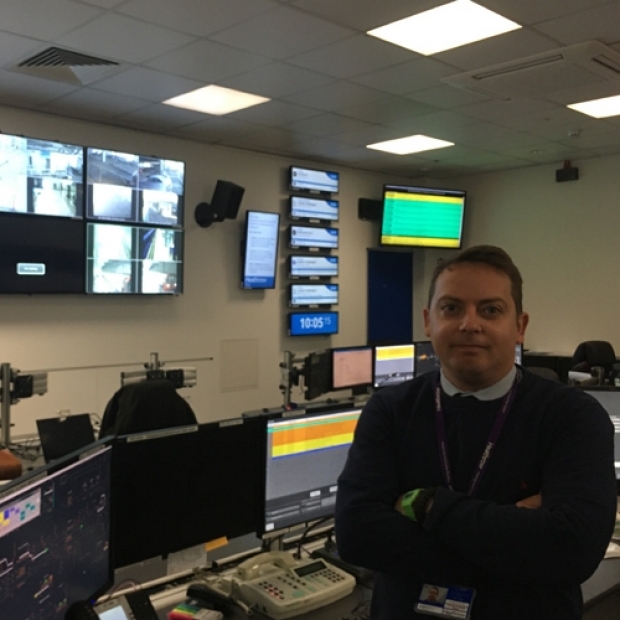 Nominations for Rail Manager of the Year

“Kevin has been instrumental in a whole restructure of the Operations Control role at Heathrow Rail and has many challenges including the Tupe of staff and movement of the Service Controller role to GWR with many staff who have worked there numerous years and has dealt with the situation in a manner that has gained great respect even those who are moving out of the Heathrow Express business. He is a credit with his positive and helpful manner in taking this forward and demonstrated excellent management skills.“

“Kevin Tarrier deserves to be Rail Manager of the year this year for achieving so much in such a short space of time, let me explain what Kevin and the team has achieved.

Kevin arrived as our Control Room manager last year whilst the control room team was going through the biggest change since the Heathrow Express ran its first train in 1998. You might say all businesses go through change but this was no easy task as the team were in the middle of agreeing TUPE conditions and right around the corner was the implementation of a brand new Tunnel Control System and Control Room revamp.

For the new systems to be installed we had to move to a backup facility, which unfortunately was not fit for purpose. Kevin got to the bottom of the concerns and issues, ensured they were fixed and organised the move to the back up control room. This was a huge win for Heathrow Rail not just for the brand new control room but also a successful test of our resilience if we were to use the backup facility in an emergency.

Kevin was also tasked with finding 6 new controllers to increase numbers in the control room, there was only about 10 of us in the team initially so the recruitment was very important as we are a close knit team. Kevin also had to go external but all 6 passed their assessments and are very much a part of the team now and driving us forward.

With the increased numbers in the control room Kevin also had to implement a new roster. A roster that hadn't been changed since 1998 and what the team have been used too for years. Kevin ensured that there was fair consultation by getting the controllers input and addressed any concerns. We are working from the new roster which was implemented successfully at the start of the year and the team are happy with it.

Kevin also helped arrange an away day with the controllers for team building and leadership training. This was something we had never had the chance to do before and it was very successful, the results can been seen in the control room as we are working better together, understanding each other’s strengths and weaknesses and leading incidents more efficiently.

Kevin is visible day to day and comes into the control room and helps with the controller duties that involves, taking phones calls, signing in visitors and is there to support during incidents. Personally to me he is a mentor and has encouraged me to attend management courses and is eager to find out how I got on and offer advice.

Kevin will probably say he does not deserve all of the credit for our achievements this year and a lot of it should go to the team. To an extent yes but without his leadership and direction it certainly would not have been possible!

I hope you can consider the nomination as Kevin deserves recognition, the team have had so much change this year but it’s been managed effectively and it’s all been necessary to keep up with demands of the rail industry. He also likes a dad joke now and again, here is one from his weekly Win, Learn Change,

'As ever, those on duty this weekend have a stress free one, remember do sharks complain about Saturday or Sunday? No. They’re up early, biting stuff, chasing things, being scary – reminding everyone they’re a shark!

For those off duty have a great weekend, remember the only limits in life are the one you make (and the drugs and alcohol policy).“

“Kevin has supported the Tupe process from Heathrow express to Hal Rail with all consideration to all members of our team, he has made this so that we were all kept in the loop of what was happening.

He also has taken time to get to know each of the team.

He makes us all feel wanted in our roles, and takes time to have meetings with us taking into account the company needs and the staff,

“Kevin moved into the role of control room manager for Heathrow Rail at a time of large scale change and uncertainty for the control room. In November 2018 Heathrow Express, Great Western Railway and Heathrow Rail transitioned into new ways of working and new responsibilities with a large number of colleagues TUPE’ing into new companies, including the operations control team who moved from HEX to Heathrow Rail. The operations controllers are responsible for the safe and efficient operation of the infrastructure at Heathrow Rail Stations. Kevin quickly established himself as the leader of the control room which contained multiple companies, always respecting different roles but also being there to support the wider team, not just his direct reports.

The transition caused considerable flux and an immediate job for Kevin was to recruit 6 new controllers, from a standing start, whilst ensuring the existing team were supported and confident to deliver the operational requirements on a 24/7 basis throughout this large change programme. Requirements to re-do the roster and introduce new members into a well-established team was done with a hugely collaborative approach and with the wellbeing and happiness of the team at the heart of his decision making, whilst also ensuring that all business requirements were met.

Kamal Walia, RMT Company Council Assistant Branch Secretary said the of re-roster work he undertook with Kevin. “Kevin has work tirelessly in ensuring a seamless transition of the new Ops Controller Rosters that was implemented this year. He demonstrated professionalism in consideration of personal needs for the Ops Controllers making sure minimal disruption and impact to the work life balance, which at times seems a daunting task. He was always willing to make changes that accommodate his Colleagues. He is an inspiration and a valued member of the Team”.

Bringing such a large number of new people in and needing to quickly develop a signed off, fully trained, highly effective and high performing team which used the experience and knowledge of long serving colleagues, whilst also embracing the new ideas, technological advances and opportunities the new members could bring, was no small feat but one that Kevin managed seamlessly. Kevin embraced the opportunities this would give his group to develop and expand their remit and influence the wider team so that they could work collaboratively to look for areas where they could take on more work and responsibility that would otherwise be outsourced. He also embarked on the largest training programme of operations controllers for a number of years and with the help of Phil Tweedie he achieved sign off for the new operations controllers well ahead of the business requirements.

Kevin has also shown his commitment to his team by undertaking the training, development and competencies required so he can do the role himself. Thereby ensuing he understands the challenges and requirements of the role and ensuring he takes on board their views and continually improves the working environment and the overall team. At the same time he has retained competencies for roles within the wider Heathrow rail structure so he can support them in times of contingencies and disruption.

Kevin has great empathy with his team and is always happy to help guide and support them, whether through training and development or simply over a coffee and a chat. He is also adaptable in his approach and will never think twice before making adjustments to his own commitments to support his colleagues, whether that is coming in for night shifts to make sure he keeps up to date with people whom he ordinarily wouldn’t see as frequently, taking phone calls at all times of the day and night and making sure his team know they have his full support and confidence when they are put into situations that are fast paced, require quick decision making and where decisions have wide reaching impacts on huge numbers of people. Kevin really works hard to ensure the team know they are supported and have the tools they need to make the best decisions they can at the time they need to make them.

Mark Chestney, Director of Heathrow Rail, said of Kevin “Kevin has been instrumental in delivering my vision of making rail a fantastic place to work through the engagement that he has with his team and other stakeholders. So many people, at so many levels in so many organisations have taken the time to make personal commendations about him.”

Having Kevin in my team is an amazing asset – normally when I approach Kevin to discuss something we need to do or an opportunity that we could look at his first words are usually ‘we’re already on it and thinking that we could…..’.

Through 2019 change has been a continuing factor within the rail companies at Heathrow and by being proactive and engaged in the change Kevin has confidently led his team through the year and put them in a position to deliver the best service to Heathrow Rails passengers.

A real team player and an inspiration to his team and the colleagues around him.“

“Always ready to help, support and aid his staff

“Great awards last night – what a fantastic set up, everyone I spoke to who hadn’t been before were blown away by just how much creativity and effort goes in to it.”