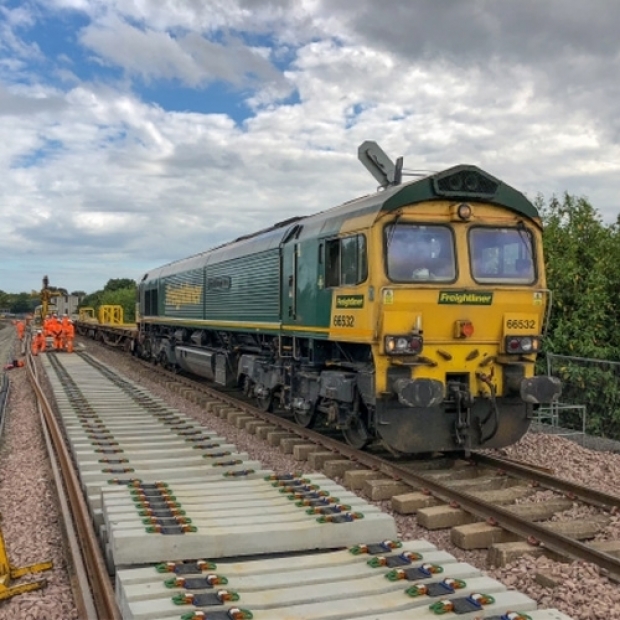 Said the following about Freightliner Aberdeen to Inverness blockade team:

“The Aberdeen to Inverness Improvement project (A2I) is a Scottish Government funded project to upgrade the railway infrastructure between Aberdeen and Inverness, to improve connectivity, support more services and improve journey times for passengers.

The upgrade includes a number of enhancements from improved signalling, platform extensions and even relocation of the station at Forres. The Freightliner team has been instrumental in the logistical delivery of a number of these areas of the project. One of the largest and most pivotal elements of the project is the redoubling of the railway between Aberdeen and Inverurie. This was planned to be completed in two summer blockades in 2018 and 2019.

The 2018 blockade involved a closure of the railway between Aberdeen and Dyce of 16 weeks, during which time the existing single line was realigned and a new second track had to be laid alongside it. Freightliner was selected to deliver the haulage for the project which included locomotives, drivers and groundstaff to haul the engineering trains to and from the sites of work.

In order to deliver the works Network Rail set up two temporary Local Distribution Centres at Raiths Farm and Kittybrewster. An added complication of the project meant that all the materials, wagons and locomotives had to be in position prior to the start of the blockade as, for part of the time at least, there would be no railway South of Raiths Farm to bring equipment in and out.

Projects of this nature rely on good planning to make sure resources are in the right place at the right time. The A2I redoubling block placed an additional challenge to the Freightliner team as it meant diverting a large amount of resources (eight locos) away from our usual depots and facilities.

Key to delivering on this project was providing locomotives for the duration of the blockade and making sure that they were available and reliable for the entire period. In order to achieve this, all the Freightliner locomotives went through an enhanced exam at our Leeds Vehicle Maintenance Facility site prior to heading to Scotland, to ensure they were in full working order and any small issues were resolved. For the duration of the blockade, Freightliner placed one of its mobile teams at Raiths Farm to be able to service and maintain the locos on site and resolve any arising issues.

Fuelling was arranged with our supply chain partners to deliver fuel from road bowsers to the locomotives whilst on site. In this way we were able to provide near 100% availability of the locomotives for the duration of the blockade.

The worksites between Aberdeen and Dyce needed to be operational around the clock as well as on arrival back at Raiths Farm, when the trains had to be shunted to allow the wagons to be unloaded and reloaded ready for their next workings. This required a large number of operational staff to be based up at Aberdeen for the period of the blockade to meet the demanding requirements. In the months leading up to the blockade, Freightliner trained 10 additional staff from across the country to be able to support the local drivers in delivering the work.

During the course of the blockade there were times when, due to the nature of the works on site, the trains needed to run at amended times. The Freightliner team were able to accommodate this due to the flexibility and willingness of the staff working on site to assist.

At the end of the blockade, Network Rail required additional top ballast to be dropped on parts of the new track. This required some of the locomotives and staff staying for an additional week on site to ensure the work was completed and the railway was handed back for regular services on time. Again, Freightliner was able to accommodate this through detailed planning and the flexibility of our staff on site.

All the work was completed and the railway was handed back to traffic on time.

Network Rail commended the Freightliner team for the work on the project, and as a result, selected Freightliner to deliver haulage services for the second half of the redoubling during the summer of 2019.

Alex Hynes, MD, Scotland's Railway said: "I wanted to say a big thank you to everyone involved in the successful re-opening of the Aberdeen to Inverness line this morning, Tuesday 20th August.

The project has seen a huge collaborative effort across Scotlandâ€™s Railway, with services resuming for our customers early this morning, after the fifteen-week closure.

The culmination of over four years detailed planning, major infrastructure works, and stakeholder engagement, will see greatly enhanced services in the North East, in the coming December timetable change.

During the project, teams have been working together on innovative solutions to reinforce the Don Viaduct to support a new double track. This will improve reliability and services between Aberdeen and Inverurie. We are also reconnecting communities at Kintore with the construction of a new station.

In the last few days, driver and conductor training has taken place to ensure we were ready for train services returning. This was another fantastic example of collaboration across Scotlandâ€™s Railway to deliver for customers.

These enhancements will transform choice for customers on the route â€“ meaning more services and more seats, helping to deliver the service they expect and deserve.

Thanks to everyone for looking after our customers during the rail replacement works and delivering a highly successful project. You should be proud of your achievements.

“Once again another great night on Saturday congratulations to you, Lianne and all the team!!”