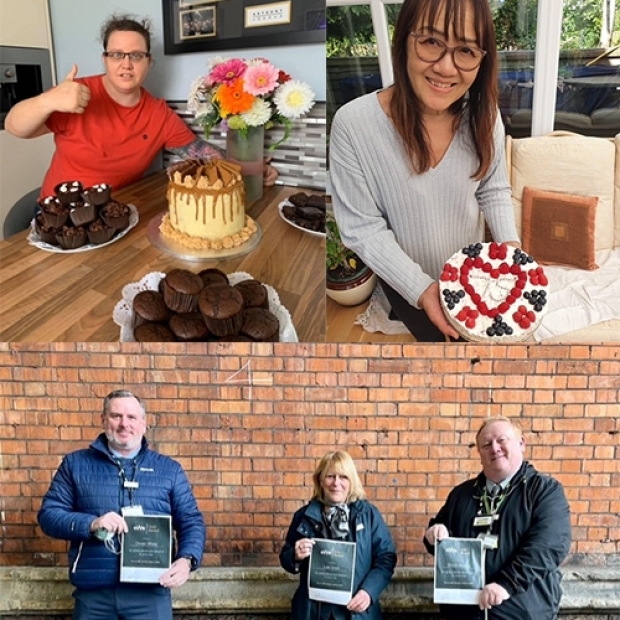 “The recent Virtual Cake Sale held on 08th May 2020 was a truly inspirational event where you showed concern for you colleague’s wellbeing during a National Lockdown due to a corona virus. Enabling, inviting and encouraging 221 individuals to bake a cake and then donate to a local cancer charity B.U.S.T (Breast Cancer Unity Support Trust) where you raised £2252.00 encapsulates the value of “Supportive of Each Other”.

Dwain White, Simon Murray (Minty) and Julie Smith are colleagues in the Central Revenue Protection Team based at Bristol Temple Meads. The trio consistently provide a listening ear to their piers whilst also sharing the extensive knowledge that they have obtained during many years of service for GWR. Consistently fulfilling their duties as Role Models and often putting others needs at the top of the agenda “always to go to people” act as a pillar of professionalism.

During the lock down due to the Covid19 pandemic Dwain White (Deputy Revenue Protection Manager. Central Region) expressed concerns to Simon Murray (Minty) Ad Hoc RPI Manager, based at Bristol Temple Meads and Julie Smith Ticket Examiner about the wellbeing of colleagues after welfare calls to the team in this time of being stood down from their duties, self-isolating and the few that were working. From this conversation, they came up with a Virtual Cake Sale as previously they had a very successful cake sale at Bristol Temple Meads. They decided that it was VE day the next week and set about planning.

At the time, the government was telling the public to:

“Stay at Home - Save Lives – Protect the Public”.

Minty, Dwain and Julie decided it was time to:

Using their skills as a team Minty set up a Facebook group whilst promoting the event through our digital platforms such as Teams and Yammer and Dwain continued to contact colleagues directly to check up their wellbeing and encouraged participation in the GWR Virtual Cake Sale. Julie did the same and contacted the B.U.S.T charity as this charity is very close to the Teams heart.

The idea was pure simplicity. Bake a cake at home; enjoy the cake with your family and house mates and Donate. Initially they thought that they would be lucky to raise £200 as it was a mad idea.

However, as the news spread and people pledging to nominate the cake sale was soon the event to be involved in. The day of cake baking was set to coincide with the 80th anniversary of VE day. Soon colleagues would be baking cakes that had a military link, recipes from the 1940’s and many embarking on their first ever attempt to make a cake. Throughout the day participants of different grades from across all of the GWR network uploaded their cakes onto the GWR Virtual Cake Sale group page. The group re-connected colleagues who had been isolated and the great sense of humour that exists in our working community brought a sense of belonging and achieving back into homes.

A number of the Bakers had never picked up a wooden spoon before just look at the pictures.

There was different Bakes from all over the UK and Europe and 1940’s recipes used as part of VE day.

The GWR Family from all areas of the business from as far as London, Swansea and Cornwall.

A local breast cancer charity within Bristol, B.U.S.T (Breast Cancer Unity Support Trust) was the choice as the beneficiary for the donation as some of our colleagues and their families have been directly supported by this worthy cause in the past.

The event is still spoken about 6 months on.

As the author of this nomination and a participant in the event I would personally express my gratitude to both Minty, Dwain and Julie. Thank you arranging this fantastic demonstration of GWR people being “Supportive of Each Other” internally but also making a positive difference to the Team and to people's lives in the community with their fundraising effort in this very difficult time.

Below are Links to the B.U.S.T Charity and Facebook group page:

The Trio on a daily basis have the duty to balance customer needs whilst protecting the bottom line of the business to ensure revenue continues coming into the business. When working on station platforms in times of disruption the trio step up and take control to ensure passengers safety is upheld whilst providing information as required. Often you will hear their calming voices supporting incident. Whilst working on trains they would support passenger’s safety by ensuring that bikes and luggage is stored in the correct areas and accessible areas are clear at all times for those needing them.

The specific example provided previously demonstrates that the trio is able to bring together a team during a very dark time and generate fun and enthusiasm to work together. Supporting a local cancer charity B.U.S.T (Breast Cancer Unity Support Trust) raised £2552 to help the wider community. Previously the charity also received £1854 from a previous cake and coffee morning sale offering our customers cake and coffee whilst waiting for their train for a small donation.“

“Thank you so much for an amazing evening. The attention to detail that goes into the Rail Staff Awards does not go unnoticed, everything from the dÃ©cor, food, entertainment and most importantly the awards themselves was first class. It was a privilege for me to present the Samaritans Life Saver Award in recognition of all those who went above and beyond and approached a vulnerable person, truly amazing, incredible work! A huge well done to you and to the Rail Staff Awards for providing the opportunity to publicly recognise such care and dedication. Keep up the good work!”