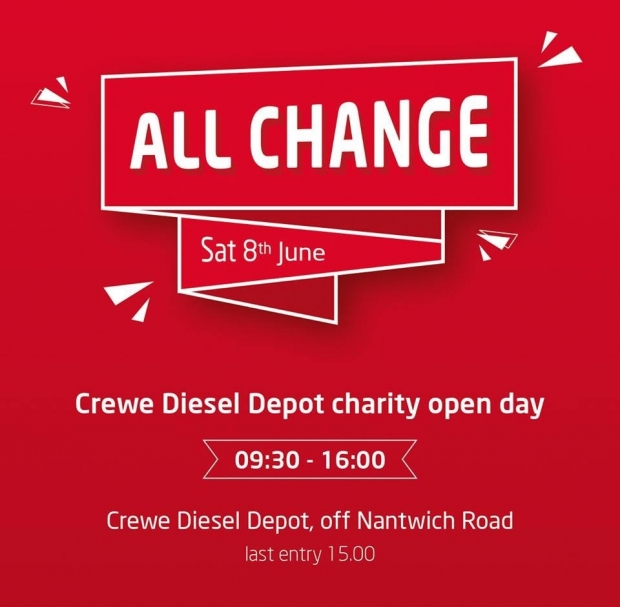 The Crewe - All Change Project Team

Said the following about The Crewe - All Change Project Team:

“This isn't a nomination for one person, but six, who as a team have worked tirelessly and just raised a whopping £72,262, with the majority being donated to the NETs cancer charity.

Back in September 2018, James Dobson (Train Manager, VT) and Jacqui Hemingway (Customer Service Assistant, VT), met with John Humphries (Operations Delivery Manager, LSL) and Steve Finn (Service Delivery Manager, LSL) to plant the seed about the idea of a charity open day at the newly refurbished Crewe Depot. The charity set to benefit was the NETs (neuroendocrine tumour) charity, a rare type of cancer that has sadly taken the early life of Alison Austin, the much loved daughter of Lyn and sister of Melvyn, a father and son who both work for Virgin Trains at Crewe, with Lyn being part of the much loved railway team for 48 years. With cancer effecting many of us, John and Steve were keen to support and set about speaking with the higher management at Locomotive Services, and shortly after doing so, approval for the open day was given. James and Jacqui spoke at director level back at Virgin and similarly, approval given. The nine months of hard work then began. The team enlisted the help of many people from across both business, of note, Chris Milner, The Editor from The Railway Magazine and Richard Stanton, Communications Manager at Virgin Trains. James set to work building relations and speaking with the majority of operators within the UK asking for visiting rolling stock and managed to secure 42 exhibits from across the country that would all descend to the Crewe Depot for the exhibition. Of note, LNER provided a Class 91, a locomotive that hadn't visited Crewe for some 20+ years, this was a real proud moment for the team and a clear winner with the enthusiasts. The Class 91 was accompanied by 5 locomotives from both Direct Rail Services and Freightliner, a Network Rail test train, a Royal Class 67 and a pair of power cars from East Midlands Trains to name just a few. James liaised with contacts at 15 operating companies arranging fleet availability, paths to and from Crewe and if that wasn't enough worked through his annual leave whilst in Portugal whilst on the lead up to the event to ensure success with some unfortunate last minute changes.

Jacqui took a lead on arranging all the charity aspect of the event, and was our point of contact between the project team, the family and NETs. All of the onsite catering was also thanks to Jacqui as well as the temporary toilet facilities, and she also organised support from The British Transport Police and Cheshire Fire and Rescue to ensure everyone was safe. Jacqui also supported the whole team with other various admin tasks and again attended meetings whilst on annual leave.

Behind the scenes at Locomotive Services, Steve and John were hard at work ensuring the depot was safe and tidy and ensured all risk assessments and insurance arrangements were valid and approved. Both John and Steve also were in regular contact with James ensuring all the required documentation was given to the companies to allow the stock to come onto site. John and Steve also ensured the home Locomotive Services fleet were all present on site and available for display, a thankless task given the rise in charter operations for Locomotive Services. The work done by Chris Milner and Richard Stanton in the lead up to the event was also a relentless task. Chris and Richard ensured the best possible media coverage for the event and thanks to Chris, The Railway Magazine successfully sold the allocation of 5,000 tickets and handled all the cash professionally.

Richard was key to organizing a very special family naming of Pendolino trainset 390115, which now carries the name "Alison" on the cab ends. He also arranged to link in with Crewe Town Council and The Mayor, who proudly named the train at the open day alongside Lyn, Melvyn and the family. Thanks to the repainting of the Pendolino fleet, cast Pendolino nameplates have become available. Richard organised an auction for the Virgin's official charity partner, Rethink Mental Health and this certainly drummed up the interest. Chris, Jacqui and Steve also managed all the external traders in the lead up to the event, with Chris taking the lead and being the point of contact in advance, with Steve being on site on from 6am on the day of the event assisting with the setup of all 50+ stalls, an almost impossible task when 50 people all want you at the same time.

The Friday before the event saw James, John and the small team of drivers and shunters make over 150 shunt attach/detach moves with an astonishing 32 miles walked on ballast to position all these locomotives in the yard, in specific places for the visitors to look at and photograph. The shunting carried on as well into the night on the Saturday after the event closed and the Sunday after to prepare the exhibits for departure.

Jacqui ensured the site was clean by giving a full litter pick and assisted in putting out temporary fence panels to outline authorized walking routes and queue pens to avoid a crush, as well as keeping the lads on the ground doing the shunt work hydrated. On the day of the event there was a team of around 50 volunteers, led by the six people above. Richard ensured a smooth naming ceremony, which was incredibly moving whilst the others ensured a safe operation of the site and its 5,000 visitors.

The event was a tremendous success, with the majority of people taking to social media asking when it will return, alongside e-mails from director level and above of many companies congratulating the success. The event was simply overwhelming and everyone in the industry pulled out all the stops, this was highlighted by the number of incoming exhibits and slick running of the day. The organisation here must have been extraordinary and this nomination is just a snippet of the hard work and dedication that the above six people put in to organizing this event, whilst also doing their day jobs too. They are all truly inspiring and this is why the all deserve recognition from the RailStaff Awards.“

“Really looking forward to attending this years awards. Hopefully Samuel Knight Rail will get nominated for an award, fingers crossed :)”