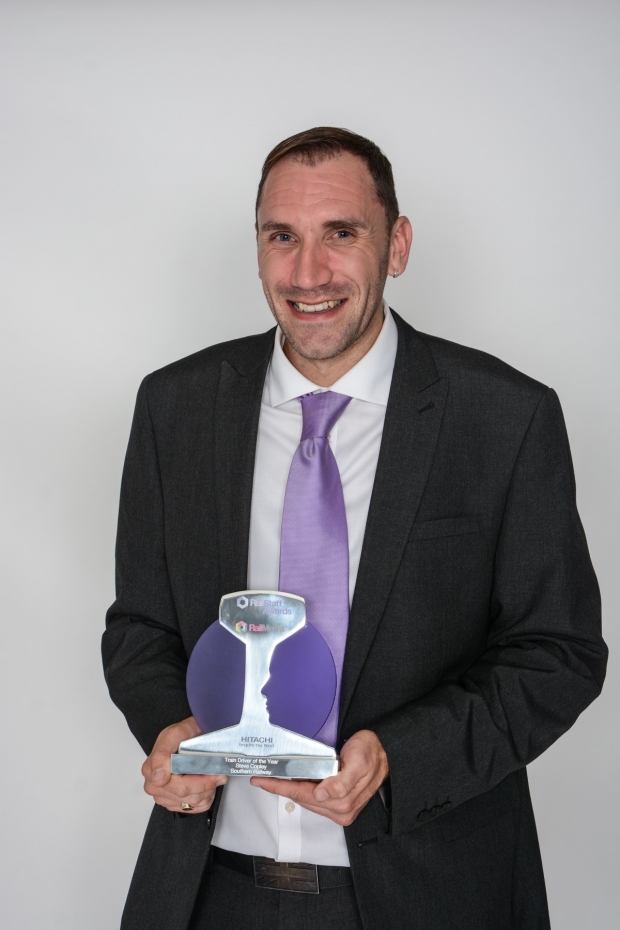 Nominations for Train Driver of the Year

“Every morning I, like many of my fellow commuters hope and pray that the train to work will have this guy at the controls. He is a commuters hero. With his upbeat and cheery persona, he lifts the spirits of grey faced Londoners by hosting a guess the year quiz over the intercom to distract us from the normal frustrations of delays and overcrowding on the daily commute into the capital, which in London is a big ask! He even has his own hash tag on twitter #timetunneltrain to which his passengers can join in with the fun. A great idea of bringing people together and getting them to interact (in a positive way) on a packed train.“

“Steve is a regular on my line and he is the TimeTunnel man. This guy is a legend. You only have to look at twitter or YouTube to see I'm not alone when I say he is probably the best train driver I've had the pleasure of travelling with in over 20 years of commuting on the railway. Comedy gold! He does a quiz, cracks jokes making people chuckle to each other, sings and generally makes people laugh with his quips and makes my journey much more bearable!“

“I’d like to nominate Steve Copley of Southern Trains for the train driver of the year award. Steve has in our opinion gone above and beyond what people come to expect from a train driver with his #timetunneltrain quiz and humorous announcements.

Both I and my uncle commute into London everyday and have been on Steve’s trains many times, both in the morning and on the way home. His voice is unmistakable and when you realise it’s him it makes people around the carriage relax, smile and normally laugh out loud at some point.

Even if the weather is grim or the trains are delayed, Steve adds a personal touch to his announcements to calm people’s frustrations by talking in a clear voice, explaining delays in simple terms, often telling jokes and doing quizzes all in a bid to make travelling that bit less mundane.

His quizzes are great fun, engaging and make people talk to each other. Steve goes above and beyond what I and many others expect when the train comes to at stop. Instead of the expected silence and wonder, comes laughter and bonus clues! He deserves this award for making London smile and making the trains he drives, trains people don’t mind being delayed on.“

“Steve consistently goes above and beyond for the customers on his train. He is now a bit of a celebrity on Southern due to his #timetunneltrain quizzes but what a lot of customers do not realise is that as well as driving trains he also drives changes in customer information. Steve has worked with the engineering team to improve passenger information systems on trains to make them easier to understand and more useful for customers. This dedication to the customer experience typifies Steve’s approach to his job. He is not happy to accept things the way they are but is always looking for ways to improve and innovate. I feel very lucky to have someone with Steve’s passion in my team and feel that the customer nominations he has received shows just how appreciated he is.“

“I would like to nominate Steve Copley. Train Driver at GTR, I was Steve's Production Manager for 8 years and he was a really helpful employee and popular with his Colleagues and also with the Public. He entertains the commuters with quizzes on the morning commute into London Bridge and has a large Social Media following. A very deserving individual.“

“All of our guests had a great night and we're very interested in sponsoring the Awards next year...”