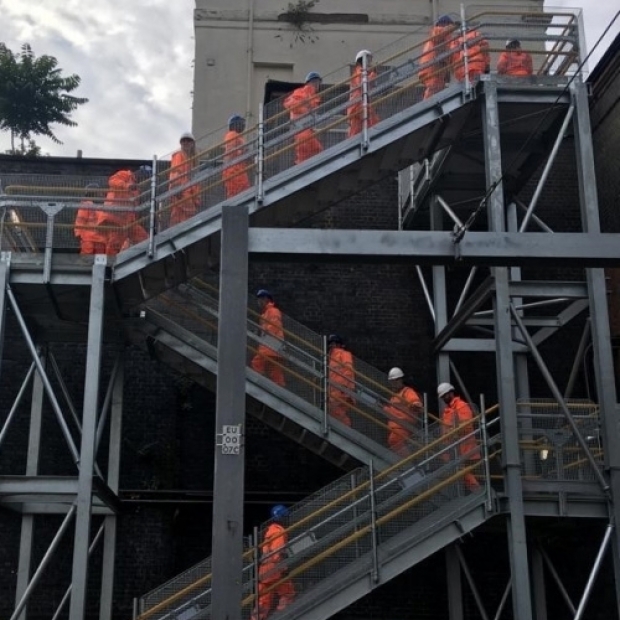 “The S&C South Alliance Euston team deserve to win the Rail Civils / Infrastructure Team Award for delivering a crucial programme of civils-led multi-disciplinary HS2 enabling works ahead of the May 2019 timetable change. This was a highly challenging programme of works, instructed in much shorter timescales than normal and the work was on the critical path to enable the construction of the new High Speed 2 terminus at Euston. The successful delivery of this important milestone was only made possible through collaboration, commitment and teamwork by the alliance partners: Network Rail, Colas Rail and AECOM. Furthermore, the team used these behaviours to develop positive, working relationships with the many stakeholders from LNW route, the local TOC, 3rd parties and the local maintainer which was vital in developing the specification for the works.

The programme of works included:

â€¢ Camden Carriage Sidings - the extension of two existing sidings, installation of a new turnout, controlled demolition of a partially-collapsed asbestos riddled building, 7 new OLE structures to support new wire runs, 460m of new driver walkway with lights, 450m of new troughing and cable management routes and extension of CET system. Throughout all of this work we maintained an operational depot for West Midlands Trains and overcame the challenges of a buried turntable in our working areas.

â€¢ Mornington Crescent Access Point â€“ extension of the 2xUp Sidings and installation of new buffer stops, demolition of a redundant building containing asbestos, refurbishment of an existing rail access building, installation of new external access steps to allow access to the TOC and the maintainer and extension to the existing driver walkways. This involved split level working, which meant a temporary works platform was required for the RRVs and scaffolding required to access the roof.

â€¢ West Side Clearance â€“ This required the installation of 2 new sets of trap points, plain lining of the Backing-Out Road and the installation of 15 new OLE structures in order to clear infrastructure from the West Side of Euston Station to allow HS2 the physical space for their construction works. There were many challenges faced with the new OLE foundations due to existing buried services that were found. Hence, the team completed the trial holes much earlier than normal to allow the necessary time to remove redundant services.

â€¢ UTXs â€“ in order to facilitate the 11kV programme of works the alliance delivered 2xUTXs, one of which was bespoke in the delivery as it involved coring 8 holes through a concrete slab over a number of possessions so that there was minimal impact to the travelling passengers.

The core works for this programme were delivered in a sensitive area in central London where there is opposition from some local residents so mitigating against this required careful stakeholder engagement with Camden Council and also attendance at regular community engagement meetings. During the planning stages, the team worked hard to minimise the impact to lineside residents and this included changing the times of noisy works such as piling for the new OLE foundations or breaking out of concrete building foundations and using radio communications as much as possible during possession working. The team were also able to facilitate the logistics for the Euston Station Homeless Christmas Lunch during the station closure.

Throughout the time working on the project the team went above and beyond to put the passenger first, this was particularly evidenced by the team assisting to get passengers off a stranded train in the Euston Throat when competent railway staff were required at short notice.

Furthermore, the team have worked closely with the maintainer, whether this be undertaking litter picking, de-vegetation works or graffiti clearance. The team also worked hard to be flexible in accommodating the maintainer when access was required for emergency works. This included making changes to worksite limits and providing plant and manpower to delivering new crossings to site and providing a generator at short notice to provide power when a trackside REB failed.

Significant achievements were also made in the area of safety and sustainability with the Euston team rolling out the CARL close-call and safety inspection reporting app across our supply chain and third parties working within our worksites to allow quick responses to identified close calls. We also introduced new task-specific PPE such as waterproof Cut5 Gloves to undertake the core-drilling for the UTXs. The team had many innovations during the project that were introduced as normal practise including: all battery-powered OLE tools which dramatically reduced the amount of petrol being used on our site, solar powered lights at the RRV access points, supplying all staff and suppliers with re-useable water bottles rather than plastic bottles, the use of digital Safe Work Packs to reduce paper waste and the introduction of MyZone including to 3rd parties to maintain exclusion zones.

One of the most difficult challenges for the team was the high number of other parties working in short possessions on the Euston approaches. The S&C South Alliance went over and above what is expected to take a leading role in integrating, managing and reporting works being undertaken by other principal contractors including Skanska and Siemens and in developing processes for de-conflicting and managing different PC areas, thus allowing all parties to deliver their work successfully.“

“I was the Network Rail client programme manager for IP Central working on the Euston Enabling Works. It was a pleasure working with the S&C South Alliance Team, who took their collaborative behaviours from within the Alliance to the wider project. This meant that the team were able to provide strong possession management for all works being carried out in the complex Euston Throat area and they were able to successfully integrate all 3rd party works to ensure the overall programme remained on time to the HS2 milestones. The collaboration went one step further and the team were able to share their learnings of compliance to the HS2 U&As with the wider On Network Project Team and implementing initiatives like MyZone for all parties working within the worksite.

Furthermore, the team were reactive, responsive and flexible as required to support the route and maintainer when emergency works needed to be carried out.

The team were professional, open and honest throughout their work, which was evidenced by their readiness and detailed planning ahead of industry reviews, consistent and accurate reporting for 6 possessions a week and their good escalation of risks.

I would strongly recommend this S&C South Alliance Team for the Civils/Infrastructure Award because they managed to achieve all of the above whilst delivering their own challenging portfolio of complex civils and multi-disciplinary projects to a very high quality and crucially on time for the May 2019 Timetable Change.“

I have found a high level of professionalism from the project team, proactive and having good communication approach ensuring a safe site for all those working or using the operational depot. I would like to pay tribute to the team and trust this scheme may be seen as a good exemplar for delivering a safe Rail project.“

“The S&C South Alliance â€“ Euston Teamâ€™s successful delivery of the civils led multi-disciplinary HS2 enabling works, was only achievable by strong relationship with the Alliance partners and stakeholders allowing open and honest communication on all aspects of the delivery. The strong team culture embodied by every member of this dynamic team was very contagious with sub-contractors and stakeholders very quickly integrating into the culture further expanding this highly effective delivery organisation.

The team culture led to the development of design solutions to overcome site challenges which removed construction risk, utilised non-disruptive possessions where possible and facilitated efficient delivery. Examples of these are many, but two very good examples of this are Watford Station and Mornington Crescent. In both of these instances the team worked to develop modular and pre-manufactured systems for the platforms and stair case to allow simple transportation and installation with available rail plant within normal possession hours minimising disruption to the public.

The pre-manufacture of the modular units through to final installed product was managed through a collaboratively developed inspection and test plan tracking each part of final product from raw material to final installed position within the project giving client surety of the high quality installation. This extended from materials testing at point of supply through to installation control with 3D instrument. This system of control was employed for all assets installed as part of the project.

These development furthermore removed the need for road closures and over-sized / excessive numbers of road haulage showing the teams strong culture to be considerate to the environmental and social issues around their core project delivery. This was particularly effective in the Mornington Crescent area where the local residents are often disrupted by rail work, and on this occasion saw no adverse feedback during the delivery and installation of the stair case.

The teams drive to deliver a high quality product extends beyond pure delivery to include mentoring and teaching to invest in the future of the rail industry. This has been highlighted where an invite was extended to the Young Railway Professionals to visit several of the sites being delivered to support their professional development to be the engineers of the future.

I have thoroughly enjoyed working with the team and found them to be the most welcoming, driven and effective team I have had the pleasure to work with. The S&C South Alliance â€“ Euston team are the team of choice for delivery of complex multidisciplinary projects and very deserving of the Rail Civils / Infrastructure Team Award.“

The team was also responsible for Health and Safety management of other contractorâ€™s works in line with Construction Design Management regulations. The team put in place a Joint Working Agreement which was agreed with the other principal contractor (Skanska) to manage safety critical activities such as common inductions, welfare, work integration, isolation planning, Any Line open working and took leadership of health and safety activities on site.

Euston station is such as busy and customer sensitive environment and the team dealt with this challenge in a professional manner delivering their works with minimum disruption to passengers. In addition, the team was very sensitive to neighboursâ€™ concerns for noise and disruption and used silent generators among other initiatives.“

“I thought the evening was extremely well organised and the atmosphere was even better than last year, and a far cry from some other awards events held elsewhere. The meal itself was also excellent.”