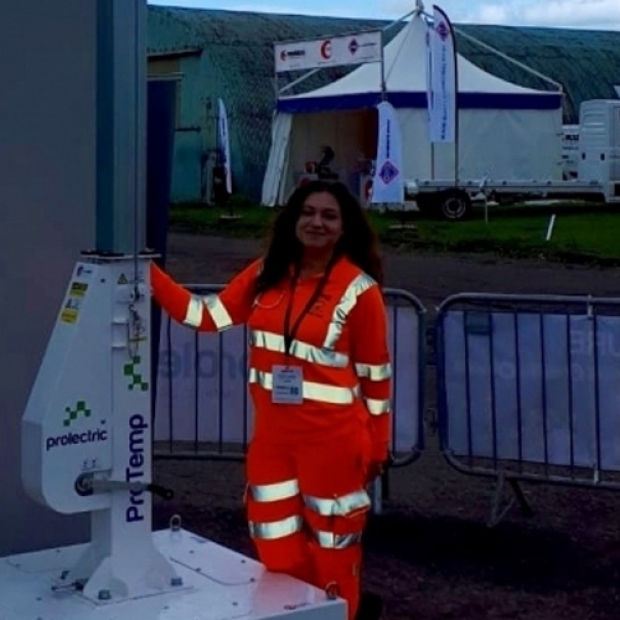 Said the following about Roxana Lupascu:

“As a Graduate and newcomer to the Railways Family Roxana has more than shown herself to be a highly competent, erudite and skilled manager. She is a pleasure to work with and will always go the extra mile without being asked.

One example of this beautiful demonstrates all off the above.

As part of Colas Rails Graduate Scheme a safety competition is run. All graduates must take it upon themselves to complete a safety project. They must proactively find and issue, look for a solution and if possible implement said solution. Roxana not only not only met the above Goals but went on to win the competition. So what did she do that makes her stand out from the crowd?

Roxana diligently reviewed all close call. She noticed that there were numerous close calls around access gates being left open and unlocked. She was concerned that the trend was not reducing despite the fact all the close calls around open access gates where being closed out. She felt that this was not good enough. After all by leaving access gates open and not reducing the amount of occurrences the South Rail System Alliance was not putting the safety of our work force and line side neighbours first.

Firstly Roxana consider fitting an alarm to the gate, however she soon released that this on its own would not fix the problem as it did not deal with individual behaviours. She consulted with colleagues and she identified that there was no consequence to individuals who leave line side access gates open and unlocked. In all cases there was no evidence that could link the offender to the open gate. So regardless of the alarm the unsafe behaviours would continue. Therefore she decided that using CCTV to monitor the gates would provide the evidence required to prove an individual had not secured a gate.

Working with Prolectric she designed and Built Gate Guardian. So what is Gate Guardian? Gate Guardian is solar powered for sustainability and fully transportable. As a person approaches an access gate a PIR sensor turns on a street light to illuminate the gate area making access and egress safer. A friendly voice recording is played welcoming the individual to the access point and asks them politely to obey Network Rails lifesaving rules and to lock and secure the gate. It also points out that all access and egress is recorded by CCTV. This polite reminder should be sufficient to ensure the gate is locked. However if the gate is found to be left open the CCTV footage can be reviewed and a behavioural conversion supported by the CCTV evidence can be had with the offender.

Roxana working with Prolectric built the gate guardian prototype free of charged and trialled it at Llanwern and Gloucester S&C renewals sites. Modification have now been made and Gate Guardian is being rolled out across all South Rail System Sites to ensure that all access gates are lock.

Roxana, not only identified a problem, she investigated it fully by getting to the actual root cause of the issue, consulted with her colleagues to find the right answer, collaborated with a supplier to build Gate Guardian free of charge, trialled it, modified it and deployed it and made it business as usual. All this was achieved in six months. Many of her senior colleagues would have taken far longer to even come close to this achievement, many would not even bother or fail en-route.

As an Innovation Leader and Chartered Engineers I am bowled over by Roxana Achievement as a graduate. Unsurprisingly she won the Colas Safety Challenge. I also think that she toughly deserves recognition from the wider railway family and what better way to receive that from her peers in the forms of a Rail Staff Award.

Gate Guardian is one of many examples of why Roxana is a deserved winner.“

“The Lifesaver award seeks to recognise those individuals who have intervened to potentially save the life of a vulnerable person on the rail network, and to demonstrate that talking and listening to someone in need can make a huge difference. Samaritans’ aims of breaking down barriers to intervening and the myths about suicide are now imbedded in rail culture with over 10,500 staff trained, while the number of interventions are up by 34% from April 2015. Empowering staff to support vulnerable members of the public, colleagues, friends or family remains a core part of the relationship between the rail industry and Samaritans and The Lifesaver award is an opportunity to highlight this crucial on-going work as well as encouraging rail staff to be champions for our service.”