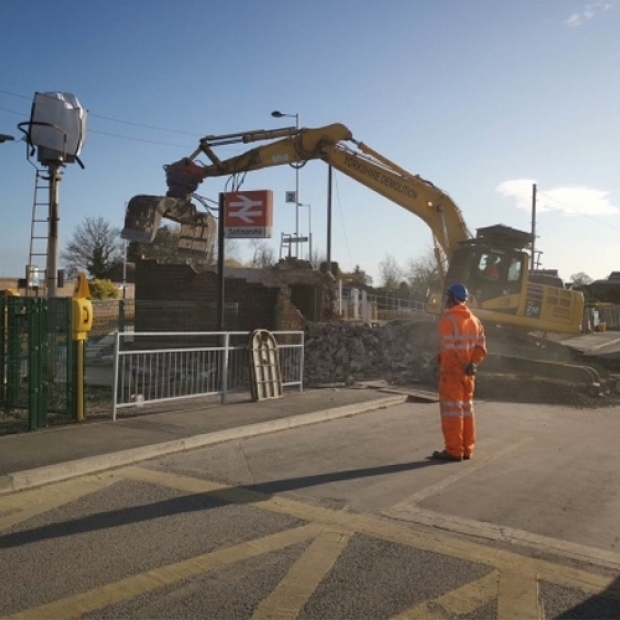 “The five members of the LNE IP Signalling project construction team are innovating, persuasive, problem solvers. They are also management and contractor interfacing, vastly experienced, partnership builders whose contribution often slips under the radar of successful project delivery. Let me illustrate this with a few examples.

Imagine the scenario; commissioning critical tree felling on the Â£84M Huddersfield to Bradford re-signalling scheme plus hundreds of passenger journeys is put at risk from the DfT suddenly and without notice, ordering Network Rail to stop tree felling during bird nesting season. The trees require felling for new signal sighting near Halifax tunnel but itâ€™s on a double curve and too busy for line blockage. Four weeks of cutting in autumn will push the work beyond the commissioning date so the potential for a commissioning delay, additional costs, public outrage and negative press is huge.

Step forward the LNE IP Signalling Construction team skilfully persuading nearby tetchy land owners, to grant ready access through their land to fell the trees in exchange for the cut down logs, fencing repairs and re-grassing. This is quicker, safer and cheaper, avoids noisy night-time disruption to neighbours and allows the trees to be felled during the day and the project to be delivered seamlessly, sustainably and to plan in October 2018. Through the sterling works of the team , 100% of redundant rail assets were also successfully re-used or recycled.

Moving south to Kings Cross in early 2019, where 40 years of silt needs uncovering from 500m of existing trough cable route in Gasworks tunnel so that cables can be traced as part of Kings Cross re-modelling and re-control project. Traditional shovelling and brushing out the silt could take up to four months and disturbing the cables risks damaging them and causing operational problems and delay to passengers. Pioneered by the construction team, a suction excavator was used to safely remove 24 tonnes of silt, exposing the cables without the need to move them. This was done in only two shifts over a couple of weeks. Consequently, there was no disruption or delay to train services in a politically sensitive area and the re-control was achieved on time.

Switching to the Ferriby to Gilberdyke re-signalling project and Saltmarshe station requires the construction of step free, disabled access to encourage passenger use. Winning the trust of a local farmer to build a site compound on his land for construction access was one of the easier problems to solve. Three trees required felling but only after bird nesting and bat surveys had been undertaken. Removal of ivy revealed the rear platform wall next to the proposed ramp required extensive repairs. A large area of wall was rebuilt using existing and locally sourced reclaimed bricks. The construction team needed to ensure the adjacent house did not overlook the ramp access and maintained its open view over the fields or suffer glare from the handrail lighting. This was done by designing the access, so it dipped adjacent to the house within the allowed fall for an access ramp. The brick wall at the end of the ownerâ€™s garden was extended so that the house did not overlook the ramp and maintained ownerâ€™s privacy from ramp users. A signalbox required demolishing for new access and this was only done following a bat roost and bird nesting survey. In winter 2018, the construction team arranged for the eaves to be netted to prevent house martins nesting allowing demolition to proceed unhindered in March without delay to trains or passengers.

At the same time, 650 tonnes of construction waste was sent to a local nature reserve for habitat creation and 16T of stone to the coast for bolstering flood defences. All this and then how do you suddenly recycle 503 recovered bricks when the council who wanted the bricks for a village sign, change their mind at the last minute? Easy, call in the construction team and the bricks are collected by the North Yorkshire Moors Railway and used for critical bridge repairs.

The team regularly challenge task methodology, particularly for weekend works and carry out possessions site visits in all weathers from midnight to dawn with a focus on handback. This conscientious approach contributes hugely to right time handback of weekend possessions time and time again so that passengers are not inconvenienced.

Since the start of CP6, over more than 30 projects, there have only been 477 delay minutes attributed to IP Signalling. There is no better way to showcase the influence of the LNE IP Signalling Construction Team to the successful running of Britainâ€™s modern railway“

From The Rail Engineer said…

“Our congratulations to you and the team for such a triumph! Everything was spot on - from the decoration of the tables, to the food, the entertainment and the band. Well done, you should be very proud (and exhausted too no doubt!)”