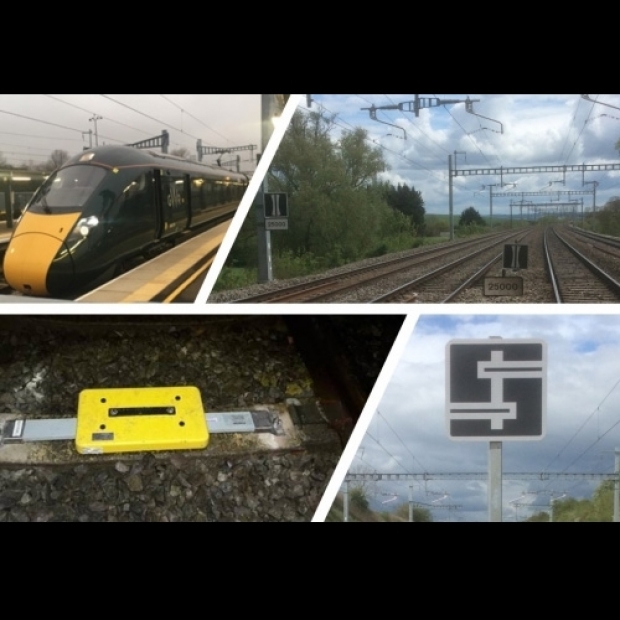 The Great Western ASDO/APCO project is a small project upon which great things depend. The project has required an exceptional level of agility and collaboration from the project team of colleagues from Alstom and Network Rail. This project is deploying eurobalises across Wales and the West of England to enable new rolling stock and the biggest timetable change in a generation on the Great Western Railway in December 2019, all whilst platforms are being extended and overhead line electrification is being delivered. Network Rail's Signalling Design Group has provided the signalling designs, and Alstom have manufactured, programmed, installed and commissioned the eurobalises. The eurobalises are installed in the four foot and send a fixed telegram message to the train to enable Automatic Selective Door Opening (ASDO) and Automatic Power Change Over (APCO). ASDO is required where station platforms are shorter than the train, and APCO where the train pantograph is required to be up or down according to whether overhead lines are energised. This means that the project brings safety and capacity benefits on stream for GWR's customers, well in advance of completion of the full scope of electrification and platform extensions.

The project had an original delivery time frame of one and a half years' duration which has been extended due to need to deliver additional ASDO/APCO sites as the electrification and platform extensions programme has evolved. Therefore the project team has had to manage a very fluid scope and programme. It has been necessary for the Alstom and Network Rail team to be proactive and develop collaborative relationships to accommodate frequent changes in requirements. All delivery dates have been met and the project is on track to support the GWR December 2019 timetable change - the biggest in a generation.

The team has had to liaise with a wide variety of stakeholders across the Western & Wales routes as the site works have been spread over a wide geographical area. Alstom have worked collaboratively with Network Rail and have reacted quickly to changes in scope and schedule as they have occurred. The project has been delivered by multiple units within Alstom and the UK team has engaged business units in Charleroi (Belgium) and Bangalore (India) to produce the balise data in line with ETCS standards.

The project team have received instructions for further sites as follows;

- ATP and APCO support for implementation and recovery of PSR at Steventon Bridge.

Claire Woolford, Network Rail Project Manager for the project said; â€œThe Western Eurobalise for ASDO/APCO (Automatic Selective Door Opening/ Automatic Power Change Over) Project Team is led by IP Signalling Southern (Western &Wales). NRDD Signalling (Reading) are the lead designers with support from NRDD Building and Civils; Alstom produce the balise data design and install the balises and Balfour Beatty Rail install the lineside signage. The Project team is close knit and proactive in nature. All parties have worked collaboratively to maintain a tight and shifting delivery programme set by The Greater West Programme (TGWP) as they electrify the mainline in the Western and Wales Routes.

The project has faced several challenges (mostly as a result of late notice changes in the staging of the TGWP programme) but throughout has pulled together to successfully deliver without disruption to others and crucially always on time:

â€¢ Last year the team were asked at very short notice to deliver a temporary power change over site at Swindon allowing electrification to extend from Didcot to Swindon in Oct 18. The design team swiftly produced a suitable design and both contractors worked extremely hard to install equipment prior to the required entry into service date.

â€¢ In recent weeks the team has delivered a new PSR at Steventon Bridge and has reconfigured the existing power change over at Didcot (Moreton Cutting) allowing for the first time a full elective service from Paddington through to Bristol Parkway. Robust planning and regular communication in the lead up the commissioning meant that on the night the works were completed seamlessly with hours to spare.

â€¢ The project team are currently dealing with further additional late notice scope as TGWP have postponed the electrification of the Severn Tunnel and have added an additional stage at Newport. This has resulted in three new power change sites that must be delivered for the Dec 19 timetable change. The project team foresaw the additional change at Newport and had already taken contingency measures to prepare balise data and procure additional balises.

At all times the Alstom project team have delivered in a professional and diligent manner. They have coped extremely well with multiple and late changes and have never failed to deliver balises in time at power change over sites for TGWP.â€“

“Just a quick email to thank you and the whole team for organising a superb event on Saturday night. Garry Shaftoe and myself had a thoroughly enjoyable time, and although sadly he did not win, we had a wonderful evening and met some remarkable people. Thank you once again.”