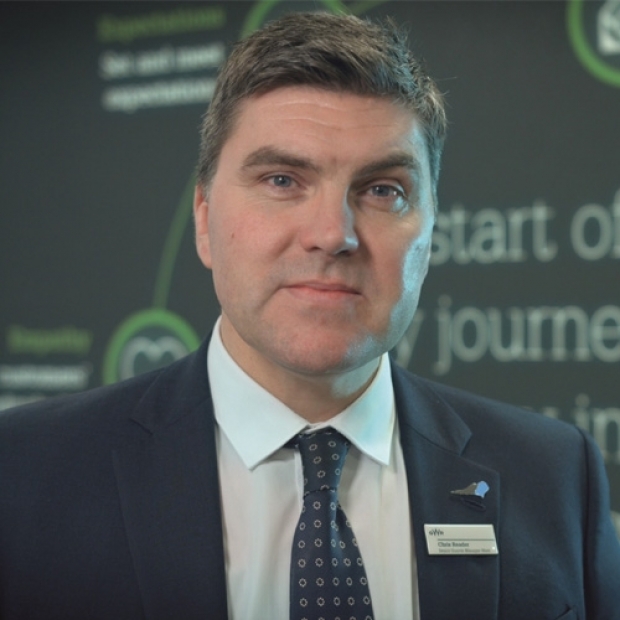 Nominations for Rail Manager of the Year

Said the following about Chris Reader:

“Great Western Railway (GWR) is one of the biggest rail franchises in the UK, part of the First Group of companies, operating the Western network since 1996, rebranding ourselves as GWR in 2015. We employ over 6000 people across our network and we carry more than one and a half million customers over two million single journeys on 10,000 services every week. People are at the heart of our business and our ethos is that we are 'greater together'.

Chris Reader joined GWR a few years ago after a long career in the Post Office. Since joining Chris has been from the very outset exceptional, displaying the full range of behaviours that one needs in our business, understanding almost by instinct the difficult operating environment and how hard it often is to get things done. The example given below demonstrates just how exceptional Chris is.

Not long after he'd been with GWR, Chris mentioned that he had an idea that would give us a huge boost in terms of management resource and also enable us to offer colleagues a really life changing opportunity. This being a chance to train in a management role without having to make the full commitment, undertaking duties on either an as and when basis or for a short period. As well providing an immediate enhancement to confidence and ability, it would ultimately enable those people to develop the skills required to achieve an eventual permanent progression into a management role.

The core of Chris’ idea was to create a number of 'Acting Managers' in each of our grades so in the event of an unexpected management shortfall and us having a need to cover a role for any length of time, we would always have people ready to step into the role at short notice, most importantly people who are already familiar with the requirements of the role and can be activated quickly.

A great idea, but one with challenges. Inevitably the people to be developed come from the group of people that this ‘acting management’ role manages. This creates all kinds of issues around confidentiality and the appropriateness of people stepping into a role managing their peers and then going back into their normal role.

The views of the union reps also had to be taken into account and for the concept to work Chris needed to build a strong level of support from these colleagues.

Chris refused to be daunted and worked up his proposal taking the full range of views into account, putting in all the necessary safe-guards, but still presenting something that had an enormous appeal to both the management team and those colleagues who would be able to take advantage of the scheme.

Chris came along to the RMT's Divisional Council meeting and presented the plan with great flair, winning everyone round spectacularly, to secure full union support. Next came the business case and internal approval, which was again achieved due to Chris’ very strong and well crafted submission.

With both union and business support, Chris then had the challenge of putting this into operation. He therefore advertised the Acting Guards Manager role within his own area first to test the concept and work towards wider business adoption. He was inundated with applications. He was then able to sign up around 8 of those who came through the selection process to train as Acting Guards Managers. This required a range of courses and other sessions to be developed in partnership with GWR L&D, aimed at developing basic line manager skills and knowledge quickly. For the colleagues involved, this was a superb opportunity to both develop those skills and also remain within their day jobs.

Release was managed carefully and generally around times and days when we had cover available for their jobs and so it could be achieved at minimal cost. A short time afterwards, the new acting managers were put to the test. One of the Guards Managers in the region, in a depot with only a single manager, became ill and was off work for a number of months. Because of the scheme, it was possible to insert one of the acting managers into the role immediately and avoid having to disrupt other locations to supply covering management. The colleague placed in the role performed amazingly well, confirming that Chris’s concept, approach and associated colleague development was highly effective.

As a result of this success we subsequently extended this scheme right across all the grades in our department and company wide. We now have an army of Acting Managers - effectively on tap to cover off long and short term requirements. Many of those developed as such also get involved with critical pieces of project work or short term assignments which enables them to develop skills, knowledge and contacts further, allowing them to prepare themselves for potential management roles whilst bringing wider benefit to the business. A number of those have now made successful applications in permanency, whilst others being happy to remain in their substantive roles long term, continue to provide call upon support, acting up to support short term business cover needs.

This scheme has created incredible resource potential and resilience within our management teams, something that was not present before, and it has contributed to wider improvements in our resource planning, sustainability and colleague development. It has also enabled colleagues who lacked the skills or confidence to apply for management roles to have the chance to try the role out and develop some of those skills without undue pressure. As such our overall management succession planning situation has markedly improved.

What is even more astonishing, is that Chris has managed to achieve all of this, without any funding! The tenacity and belief that Chris brought to this initiative, along with his skill to think and engage with others creatively and with great personalbility, has been almost the entire foundation of its success.

There is no way that any of this would have happened without his determination. Chris has created something very special within the business, something that has scalability and sustainability, and will certainly stand the test of time under even the toughest of circumstances.

Chris understands how to get things done working in a collaborative and supporting way whilst maintaining a steely determination to achieve the right results. This is the formula for success in GWR and makes Chris a truly high value contributor and popular colleague.

The feedback on the Acting Manager programme has been widespread and incredibly positive, and for his work in this area Chris received the highest accolade our company can bestow in respect of recognition. In February 2019, through being nominated by colleagues, Chris received one of our yearly Excellence Awards, this being for Great Leadership.

Chris remains very modest about his achievements and it would be lovely if he could be recognised more widely, outside of GWR, by other railway colleagues for his achievement.“

“You can be justifiably proud of the event and it's standing within the industry it will grow even further for next year, I have no doubt.”