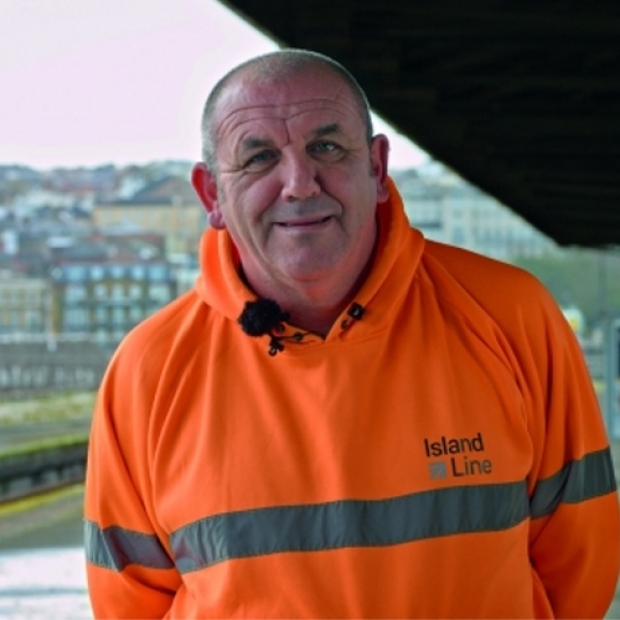 Said the following about Andy Pomroy:

“Andy Pomroy is a handyman on South Western Railway’s Island Line on the Isle of Wight, working across the Operations, Stations and Fleet departments to play his part in the running of the Isle of Wight railway.

His job title of “Handyman” is deceptive as his range of skills are much more than his job title would suggest. He is a qualified signaller, lookout, depot driver and also holds a whole host of track competencies that help run South Western Railway’s Island Line with the relatively small number of staff on this part of the network.

On the evening of 14th of November 2018, Andy was the on-call manager when he received a report of a fire on a train. Immediately, he began to plan for alternative travel arrangements for South Western Railway’s customers, before travelling to the scene to deal with the incident.

Once at the scene at Ryde Pier Head, Andy assessed the situation and began to resolve the problem. All of this was alongside, receiving requests for more information from colleagues and managers across the business. However, these distractions did not deter Andy from focusing on the priority of recovering the train.

In a safe, professional and organised manner, Andy was able to swiftly inspect the damage and make safe the shoe gear so that the train could return to Ryde St. John’s Road depot in a controlled way.

Andy resolved this incident quickly and safely to return the service back to normal as quickly as possible. I and his colleagues recognise his personal commitment to the Island Line in the fact that he is one of only four people on Island Line that are on call, the others being the Fleet Depot Manager, Operations Manager and the S&T Technician, demonstrating how he is held in such high regard by being given such responsibility.

Glen Laishley, Andy’s line manager said, “Andy’s can-do attitude and flexibility to the job and all of its demands sets a great example to all of us in the South Western Railway”.“

“Hearty congratulations to all who helped organise and run this year's RailStaff Awards, however large or small their involvement. Once again it was a brilliant evening - very much the “Railway Industry Event of the Year”! Now all we have to do is make next year’s event even better. We do make life difficult for ourselves!”