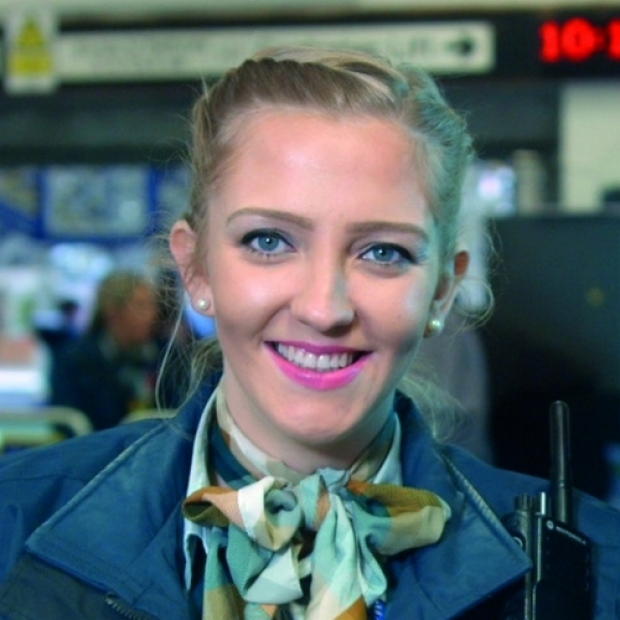 Said the following about Amy Chapman:

“Great Western Railway (GWR) is one of the biggest rail franchises in the UK, part of the First Group of companies, operating the Western network since 1996, rebranding ourselves as GWR in 2015. We employ over 6000 people across our network and we carry more than one and a half million customers over two million single journeys on 10,000 services every week. People are at the heart of our business and our ethos is that we are 'greater together'.

Amy has been working at Exeter St David's as a customer ambassador since the first introduction of ambassadors in 2014. She has shown a passion for customer service and during times of disruption is a valuable leader and can turn a group of unhappy customers to a group of delighted ones by tailoring her approach to ensure they receive the very best service.

Outside of her daily role Amy has become involved in a lot of charity work within our local community. In 2015 Amy organised a team of 9 managers and staff to take part in a skydive raising over £10000 for the Dame Hannah Rogers trust. She then formed a further relationship with the charity and set up a donation system on the Exeter Gateline where passengers were asked to make a voluntary if they were entering the station but not travelling raising around £300 a month for them. After two periods of maternity leave, Amy returned to work and formed a relationship with the Exeter Deaf Academy. She taught herself sign language and regularly presents at the academy to talk to deaf children about careers and rail safety. She also has a deaf intern who is gaining valuable work experience with her in the hope it will help him gain future employment.

Following this, she has become involved with the WESC foundation who are a local school for blind and visually impaired students to allow a visually impaired student to also him to gain work experience. Amy is also involved with Careers South west and attends local schools to talk to school leavers about careers. She also takes the 'ghost box' into schools and hosts trips for younger children to tour the station and teach them about safety of the railway. Amy is incredibly committed to helping members of the deaf and blind communities access our services and through her links to local support services she is compiling a book of experiences and advice to help customer facing staff work better with people who have disabilities. She has also recently become involved with selling the Pride lanyards for the Albert Kennedy Trust.

Nothing is too much trouble for Amy and she will go the extra mile to help others, for example, Amy found a little girls toy which had been left on a train and following a very worried mum calling in to see if it had been found (her daughter was very attached to the toy and was very distressed), Amy took it upon herself to drive round to the owners house in time for bedtime.

Through her commitment to her community Exeter St Davids has become known as a place for opportunity and young people are often contacting her to try and get involved in work experience or volunteering opportunities too. She juggles this community spirit with a busy family life having 2 young daughters and a baby, which makes her selfless activity all the more impressive.

Amy is already an award winner, having won our Community Award at our internal Excellence Awards (our yearly prestigious red carpet event for colleague recognition) and an Above & Beyond Award at the recent Everywoman in Transport & Logistics Awards. We hope Amy will win one more in 2019, as she really does deserve to be recognised for her ongoing selfless efforts to make her community a great place to live.

This is what our customers say about Amy:

Tweet @emmacayley @gwrhelp huge thanks to your amazing colleague Amy in the Station Managers office at Exeter St David's who located my daughters lost toy on the train, got it sent back to Exeter and personally delivered it that same evening to the house with a special message“

“Many thanks for Saturday night! A great night and excellently planned!”